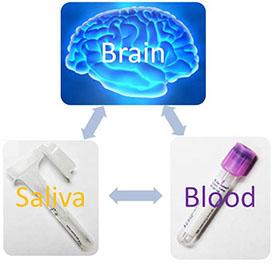 A challenge in psychiatric epigenetic studies is that the organ of interest is the brain, which, of course, is very difficult to access in live humans for the purpose of obtaining samples for DNAm analysis. Thus, we need to rely on peripheral tissues for our studies. However, it is not known whether DNAm changes in the periphery reflect what is happening in the brain. We, in collaboration with Iowa neurosurgeon Dr. Hiroto Kawasaki, are collecting brain tissues resected for the treatment of refractory epilepsy, together with saliva and blood taken before and after surgery, so that we can test DNAm correlation among them at specific loci. This could help determine which peripheral loci are most useful as markers for DNAm in brain.

Genome-wide DNA methylation comparison between live human brain and peripheral tissues within individuals- paper cited over 50 times since published in 2019.

A potential mediator of the relationship between a stressful environment and epigenetic change might be stress hormones, the glucocorticoids. To test this hypothesis, a team led by Dr. Potash conducted an animal study giving exogenous steroids to rodents, and they observed changes in expression and DNA methylation at the fkbp5 gene, which encodes a glucocorticoid receptor complex chaperone protein. This research showed that steroid hormones can change epigenetic marks, including DNA methylation. I aim to test whether high dose exogenous steroid exposure in humans can lead to epigenetic changes. I have established a collaboration with an oral surgeon, Dr. Kyle Stein, and we will be collecting buccal swab and saliva samples from patients who go through major jaw surgery (~150 cases/year) as well as minor wisdom tooth extraction (~2,500 cases/year). For the major surgical procedure, patients receive a total of >1,000 mg of methylprednisolone. For the minor tooth extraction, they receive 10 mg of dexamethasone, which is equivalent to 50 mg of methylprednisolone. We plan to employ a genome-wide DNA methylation array, Illumina’s Infinium Methylation EPIC BeadChip, to measure the influence of steroids on DNA methylation. With these two cohorts, I am hopeful that we will capture the epigenetic changes induced by glucocorticoids. We will also measure their baseline and post-exposure mood, anxiety and psychotic symptoms using rating scales. This will provide an opportunity to assess who is sensitive to these potential steroid-induced psychiatric side effects. Those clinical differences might be accounted for by epigenetic variation, or by genetic variation, or a combination of both.

Epigenetic Investigation of Stress in Depression and PTSD

It is highly likely that significant trauma leaves molecular marks in our system that lead to psychiatrically poor outcomes such as depression and PTSD. However, it is usually challenging to capture the influence of different kinds of trauma all together at the molecular level because, as opposed to using an animal model, it is hard to control potential confounders in human studies. Thus, it is crucial to identify a large cohort with a relatively uniform type of trauma. A research group from the Japanese National Defense Medical College has been studying their patient population over many years, with detailed clinical information including patients’ trauma history. In collaboration with this group, we are measuring DNAm to investigate the influence of trauma and its susceptibility to depression and PTSD.

Delirium is a prevalent and dangerous state of confusion that affects millions over 65 years of age. A lack of effective screening methods in high-volume hospital settings results in delirium being seriously underdiagnosed and undertreated. Undetected delirium in hospitalized elderly patients greatly increases mortality, length of stay, and rates of post-discharge institutionalization. One-year mortality rates after delirium can be as high as they are for heart attacks.  Beyond those human health costs, annual financial losses due to delirium are estimated to be over $150 billion in the U.S. alone.

Current diagnostic and screening methods for delirium based on conventional 20-lead EEGs or various questionnaires have a number of drawbacks.  The former is time-consuming, expensive, and cumbersome. The latter is also time-consuming, requiring many hospital staffs, thus expensive, and can be highly subjective. Thus, they are neither practical nor feasible for screening large volumes of hospitalized patients, even if limited only to high-risk populations. This project aims to prove the feasibility of developing an accurate/objective portable point-of-care (POC) device for delirium detection and screening in hospital settings.  As envisioned, this new, bispectral EEG (“BSEEG”) system (using only a few EEG leads) would be rapid, objective, low-cost, and user-friendly. It would be based on a novel signal-processing algorithm that can detect delirium early on to save patients’ lives, hospital resources, and healthcare costs.

Our research team conducts a proof-of-concept project focused on developing a signal-processing algorithm/POC device for the mass screening of hospitalized elderly patients and for early detection of delirium.  Their preliminary work has shown that BSEEG can provide good-quality brain wave signals that compare well to the signals obtained via conventional EEG in a matter of minutes vs. the hours or days it takes to administer and interpret standard EEGs.  The team has also shown that preliminary analysis of the spectral density of brain waves from just two channels of a BSEEG can distinguish delirious patients from normal controls, as well as a delirious state from a recovered state for a single individual. Based on this strong preliminary data and the broad expertise of the R&D team, the Shinozaki Lab is, with the help from UI Research Foundation (UIRF), pursuing opportunity for commercialization of this technology so that this technology can be brought to the patients as soon as possible. In Sept 2015, UIRF has awarded GAP funding to the PI, Gen Shinozaki, to support this project.

Mortality prediction by bispectral electroencephalography among 502 patients: its role in dementia